From the magnificent slopes of Table Mountain to the fantastic majestic Grand Finale situated at Val de Vie Estate with a crazy time trial between, the Cape Epic 2018 route was designed to be bold and balanced. The overall distance covers 658km, with 13 530M of climbing that will include 4 consecutive days of 100km, and the final stage which is extremely difficult to reach the line, with a Stage 5 time-trial that may shake-up even the most elite riders. There will be highlights screened everyday on Supersport so we hope you have updated your membership and have your DSTV installation optimized for this amazing event.

Here is an overview about the 2018 route:

This section covers over 20km with 600m of climbing. Short but extremely sharp, riders will have to ride over a vicious climb on 100m in length with certain sections that ramp up to steep and unforgiving gradients. The last punch on Table Mountain is Dead Man’s Tree before they will find a mass of spectators waiting to cheer the riders on, where they will loop back onto the finish. The last challenge includes the quick descent associated with Plum Pudding, which is the Land Rover Technical Terrain section.

This section covers over 110km with 1900m of climbing. The first day of the Cape Epic is never easy that welcomes all riders that come with a smile that soon turns into a grimace associated with endurance and effort. This part of the race involves rolling around farm roads, that follow up with sharp kickers and a rock n%u2019 roll descent over rutted and rocky descent of Con’s Single-track. The Takkap Climb occurs just before the halfway mark and is considered the largest challenge for this day. Then the “Hidden Cliff” of Skuilkraans forms a part of the 14km uphill battle before a small reprieve and a few more testing climbs that go through the Elandskloof Reserve.

This stage covers 110km and 2000m of climbing. This part of the race is similar to a 10-round championship boxing-match with its different climbs that throw uppercuts and jabs at the riders throughout the day. There is a bit of fun to be had with the Bosvark 10km single-track swoop after 82km, which for most riders is the highlight of their day. It is advisable to keep their reserves for the remaining 40km.

This is the transition day that is longest-stage for the Cape Epic but is not regarded as the most-challenging when it comes to terrain. This stage covers 122km and 1800m of climbing. The initial 20km will include 3 climbs, with Penn Hill the primary challenge for the day with a 3.5km brute climb which comes directly after a 12km uphill graft.

This section covers 111km and 1800m of climbing as is regarded as the toughest part of the race. This section is inclusive of the 2 hardest climbs of the Cape Epic that will leave a few riders extremely exasperated at certain times. 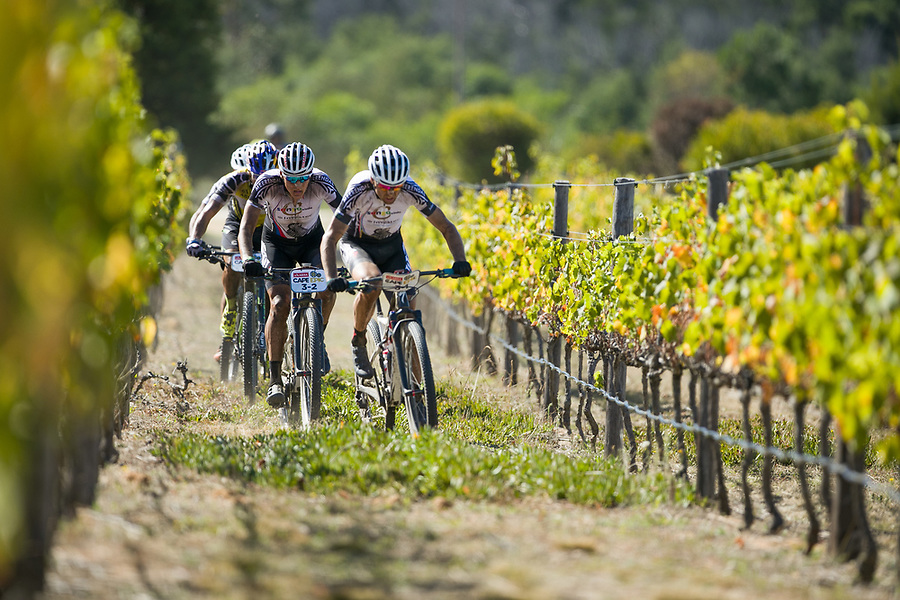 This stage is the flat out but very far from actually flat and covers 39km with 1430m of climbing. This is a timed trial that could shake event the most elite of the categories with the intensity associated with altitude gain and a very short day. Rondawel forms the first 5km of the race, followed by Plantation over 13km, and Seven Peaks over 22km. The fun really begins with Bobsled bridge along with the single-track descents of “Cool Runnings” and “Cool Runnings Two”.

This section covers 76km along with 2000m of climbing. This is regarded as a fun-day for the Cape Epic, but riders still need to travel up in order to enjoy all the down hills.

The last leg of the Cape Epic involves 70km and 2000m of climbing, where the climb starts after just 3km on the Patatskloof, with the concrete strips which indicate the start of the Beulah climb. Once Protea Climb is completed riders are given a glimpse of the finish situated at iconic Val de Vie, yet are faced with the final challenge, known as Freedom Struggle Climb. This Bone Rattler descent will be followed up by a 3km bumpy, rocky and very loose descent where all riders need to exercise extreme caution. The last 6km is over the purpose-built singe track onto Grand Finale situated at Val de Vie Estate where riders get to celebrate wearing the Cape Epic finisher’s medals.